On 8 May, Year 10 students from East Leake Academy heard testimony from Holocaust survivor, Martin Stern MBE, as part of a visit organised by the Holocaust Educational Trust (HET). 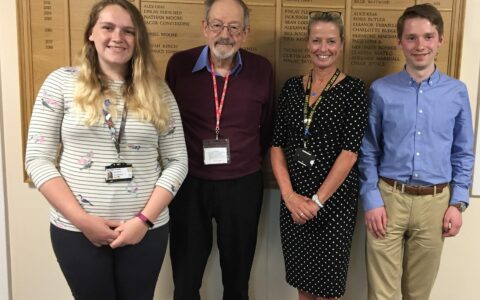 Mr Stern, a retired doctor, recounted how at the age of only five, he was living in Amsterdam and was arrested by the Nazis because he was Jewish.  He spoke of the horrific circumstances of being a Jew at that time, and how he and his sister were sent to a concentration camp in a Czech town called Theresienstadt, and survived the war.

The testimony was followed by a question and answer session to enable students to better understand the nature of the Holocaust and to explore its lessons in more depth.

Principal, Kathy Hardy, said: “It was a privilege for us to welcome Martin Stern MBE to our academy and his testimony will remain a powerful reminder of the horrors so many experienced. We are grateful to the Holocaust Educational Trust for co-ordinating the visit and we hope that by hearing Martin’s testimony, it will encourage our students to learn from the lessons of the Holocaust and make a positive difference in their own lives.”

Karen Pollock MBE, Chief Executive of the Holocaust Educational Trust added: “The Holocaust Educational Trust educates and engages students from across the UK, from all communities about the Holocaust and there can be no better way than through the first-hand testimony of a survivor. Martin’s story is one of tremendous courage during horrific circumstances and by hearing his testimony, students will have the opportunity to learn where prejudice and racism can ultimately lead.

“At the Trust, we impart the history of the Holocaust to young people, to ensure that we honour the memory of those whose lives were lost and take forward the lessons taught by those who survived.”