Year 12 student, Verity M, produced this article as part of the Lessons from Auschwitz project.

Humanizing the Holocaust
Each year on the 27th of January we remember the Holocaust. We remember the victims, the astonishing events and the perpetrators. We remember these things as a society, with a collective goal in preventing them from happening again. It has become our responsibility to remember and show respect to those who were unjustly murdered. East Leake Academy has always fully understood this responsibility, working with the Holocaust educational trust since 2016, being part of the Lesson’s from Auschwitz project, which has provided students with the unique opportunity to visit the site of Auschwitz Birkenau and explore the importance of remembering the Holocaust. The learning about the holocaust is one of the best ways to remember and bring justice to those who lost their lives.

This year, however, has prevented the usual visitation to the death camp. Nevertheless the work of the HET has not been held back. In June this year my fellow classmates, Freya K, Kathryn O, Amelia T and I were able to partake in a virtual version of the project. Each of us was affected by the experience and has been able to deeply reflect on what we have seen, heard and learnt. 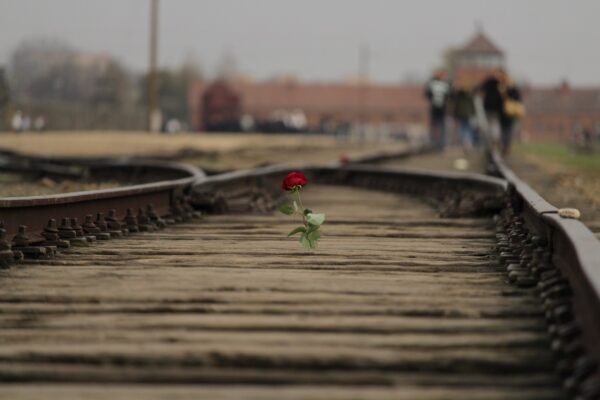 ‘Being part of the Lessons from Auschwitz program really developed my perception and enriched my understanding of the tragedy that was the Holocaust. It highlighted to me the importance of approaching the Holocaust from an individual level, recognising that both victims and perpetrators were people with their own unique lives, abilities, and aspirations.’ – Freya

The project compiled of independent learning, live sessions with the Educational trust and survivor Manfred Goldberg, as well as a virtual tour of Auschwitz Birkenau. Our journey toward fully understanding the holocaust began with its definition: ‘The Holocaust was the murder of approximately six million Jewish men, women and children by Nazi Germany and its collaborators during the Second World War’.

It is easy to get caught up in the statistic of ‘six million’. But to really comprehend this mass figure we must consider each of the ‘men’, ‘women’, and ‘children’ as individuals – each with their own unique stories, personalities, hopes and dreams. People like you and I. Each murdered for merely being Jewish.

‘This definition gave me many things to think about, such as the use of the word ‘children’ showed me that the Jewish people were persecuted due to who they were and their religion instead of their actions’ – Kathryn

‘Behind the figure of ‘6 million Jews’ are individuals such as Manfred Goldberg and Kitty Hart Moxon, whose testimonies we were able to hear through the online program. They shared with us their own unique experiences as children during the Holocaust, and hearing these helped to establish the real events that took place and the effect they had on real people.’ – Freya

To fully conceptualise this magnitude of loss, we must first understand what was lost. To achieve this within the project we focussed on how the holocaust had an impact on Jewish people across Europe, people who barely saw themselves as Jewish and people who clung on to it as part of their humanity. By discussing the wide range of ways people were affected, helped to remove some of the preconceptions surrounding the holocaust. The Holocaust may seem to have been a highly effective and systematic process, however, the methods and treatments used across Europe varied – from country to country and ghetto to ghetto. This imperfection further emphasises it as the work of human individuals.

Learning about life before the holocaust is also important such as the town of Oświęcim. This was particularly enlightening as it was a town, in which its history of Jewish and Christian communities living together harmoniously has often been overlooked and ignored. By 1945, Oświęcim would be known by the name the Nazis gave it, Auschwitz, and the Jewish population which made up nearly 60% of the town would be completely wiped out.

Understanding the richness of the Jewish culture such as in Oświęcim, and what was taken away is vital in understanding this tragedy. Perhaps, on reflection, the definition also should include how the Jewish culture faced near eradication – how the true aim was to completely obliterate any trace of Jewish existence. Several languages were almost lost. Synagogues, names and communities all wiped form history.

‘During the course we were taught about the pre-war Jewish life, we were taught the communities were a mix between the Christian and Jewish religions, with a mutual respect between these groups during times of holidays. I was able to learn the significance of the Great Synagogue, with it being the centre of the Jewish community.’- Kathryn

Survivor testimonies play a crucial role in understanding the treatment of the Jews. In a live session we experienced the testimony of Survivor Manfred Goldberg who was a child between 11 and 15 during the holocaust. His story was incredibly complex and highlighted that while we can still get his individual insight; there are so many stories that will never get to be told.

‘Hearing Manfred’s testimony was extremely moving and inspirational. He recounted each event and explained each decision, to give us a better understanding of what he, and many other people, had to experience. Hearing survivor testimonies is one of the most powerful ways to remember the Holocaust, and it is even more important now, as the survivors won’t be around forever, and we must continue to share the stories and experiences even after the people are gone.’ – Amelia

The virtual experience allowed us to be able to visualise the things we learnt. Being transported into the compound of red brick buildings, onto train stations and inside barracks where hundreds of Jews and other minorities groups stood, brought them further out of the shadows of the past and into reality.

‘We were shown the camp of Auschwitz Birkenau through virtual reality and learnt about the living and working conditions. I think this experience gave me a new outlook on the Holocaust and how important it is to remember that humanity of the victims of the Holocaust rather than the statistics.’ – Kathryn

At the end of the project we took a look into how the holocaust is still relevant today – how anti-Semitism is still a huge problem not only in the UK but worldwide.

In the UK today, Jews make up approximately 0.5% of the population (around 284,000 people).The Community Security Trust (CST) recorded 1,668 anti-Semitic incidents across the United Kingdom in 2020, the third-highest figure that the CST has ever recorded in a single calendar year and the highest figure since 1984.

‘We often want to simplify and separate ourselves from such horrific events, but it’s crucial that we reflect the Holocaust and recognise the commonalities between the past and present society. It’s surprising how many similarities can actually be drawn between the time of the Holocaust and the contemporary society we live in today, and it is crucial we recognise this in order to avoid such happenings repeating themselves.’ – Freya

All four of us are passionate about sharing our experiences with our school and wider community. We are looking forward to continuing the tradition East Leake Academy has of providing its students with a deeper understanding of the holocaust. As the younger generation we have the biggest responsibility in continuing the act of remembering and keeping the stories alive. By humanising the Holocaust we can remember that it was a product of human endeavour and not the result of an ambiguous evil power. This allows us to provide a form of justice for those who lost their lives and remember them each as individual victims.

‘All it takes for evil to triumph is for good people to remain silent’ – Manfred Goldberg
Manfred’s message here reiterates how important it is for us to realise the power we have as individuals and how events such as the Holocaust can take place when we allow ourselves to become bystanders and let prejudice spread. This knowledge is key to achieving our goal of preventing such atrocities like the Holocaust from occurring today.